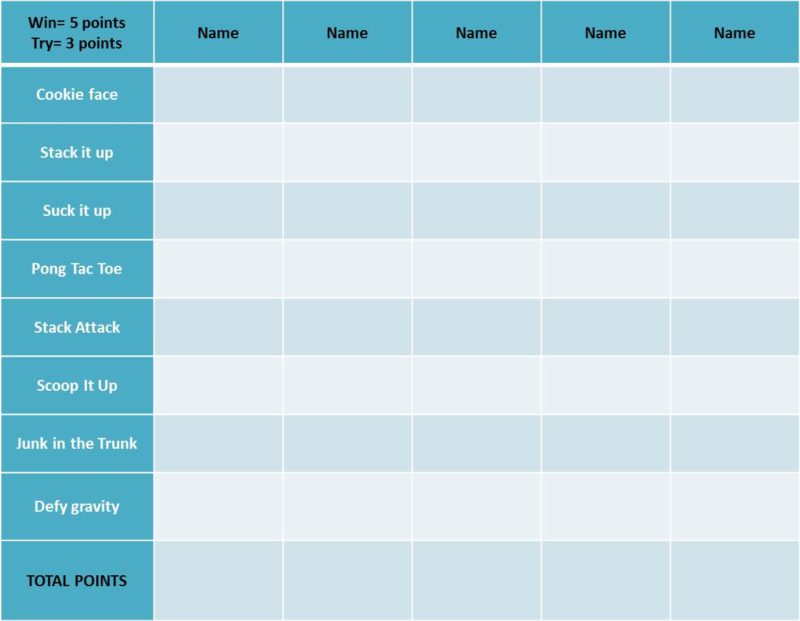 These ‘Minute to Win It’ games were a huge success at Paige’s 13th birthday.

This is a great game to kick off the party because all of the players can compete at the same time (or you can break it down into several rounds of gameplay). Each player places a cookie on their forehead, and the goal is to get the cookie into your mouth using only your facial muscles in under 1 minute. No hands! This is tougher than it looks!

Players must stack 25 coins (I used 5 cents) in under a minute using only one hand. This game works well with 3 players competing in each round of play.

Players place a straw in their mouth and use suction to transfer a pile of 25 M&M’s (or smarties) from one plate to another in under one minute. Only one hand may be used to hold the straw. Everyone gets to eat their candy when the round is finished!  This game also works well with 3 players competing in each round.

Pong Tac Toe was one of the guests’ most favourite games.  Using blu tac I secured 5 large plastic drinking cups to a table.  Each player had one minute to bounce the ping pong balls down the length of the table and into the cups – 3 in wins!

Players have to stack up a pile of cups and then place them back into a single stack in under a minute. Each guest stacks 21 cups. Two players competing in each round works well so that any falling cups won’t knock over the competitor’s stack, too!

Using nothing but a spoon in your mouth, transfer six ping pong balls from one bowl to another) in less than one minute. No hands! Hands are only allowed if you drop the ping pong ball, and then they can be used to place the ball back into the original bowl for another transfer attempt. 2-3 players compete for each round of play.

Junk in the Trunk

This game was another crowd favourite! To prepare for this game, empty a tissue box, and use a knife to make two slits into the bottom of the box. Thread an adjustable belt or wide ribbon through the two slits to create a tissue-box-on-a-belt. Removing the thin plastic barrier from the tissue box opening will make gameplay easier (for younger children) or keep it intact for more challenging play.  To play the game, strap the tissue box onto the player’s back, and fill it with 6-8 ping pong balls (we used 6, but 8 would be appropriate for older children and adults). Shake, shimmy, jump, and dance around until all of the balls have fallen out of the tissue box. No using your hands and no laying down! This game is hysterical to watch in action!

Using only one hand, players must keep two balloons from touching the ground for one minute. For a more challenging game, increase the amount to three balloons per player (and use different coloured balloons for each player to make it easy to differentiate!). No holding the balloons!  2 players per round of competition worked well to give the players ample space to knock their balloons around.

The player with the most points at the end of all games wins a prize.  Mel bought a notebook and pen from Typo as the prize. There’s a blank scorecard for you to use too – simply click on the image above to enlarge and print. Enjoy! For more Ideas, visit our Home Page. So, I hope like These “Minute To Win It Games”, if you have liked this post, share it with others, Thanks